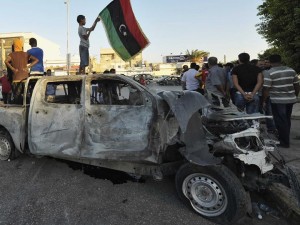 Indirect foreign intervention in Libya could soon be underway as the U.S and its allies prepare to train a General Purpose Force to secure important state facilities. U.S, Britain and Italy have earlier on promised to train 5,000 to 8,000 troops of the militias but the project could be a failure due to their unwilling disbarment.  The General Purpose Force is to become the new plan in avoiding Libya becoming a failed state.
A senior U.S defense official under the condition of anonymity said the intakes could be the core of a new national army because they want to “shift attitudes and create new allegiances” to the central government.Analysts think that training and arming a group of people will worsen the situation and create aggressive political competition between the different armed groups.
Several countries have offered to train Libyans but it is believed that their ambitions are to get their own share of Libya’s wealth and protect their interests under the prevailing anarchy.The U.S official said that they “have certainly seen multiple agendas playing out in the course of multiple external partners”.
The political division has reached a stage that Frederic Wehrey, a Libya expert at the Carnegie Endowment for International Peace, claimed that “any attempt to set up a new institution is seen as a zero-sum game — that this is a win by my rival”. Members of the General National Congress are seriously divided and they enjoy different militia backings.
Before the beginning of the General Purpose Force training, militia leaders have started discrediting it. They claim that majority of the beneficiaries will be from Ghadaffi’s regime. The list will be compiled by the Defense Minister and will be vetted by the training countries.