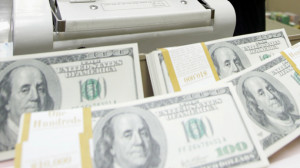 Saudi Arabia will be offering $5billion to Egypt to save its declining economy. The Egyptian Stock Exchange has been on the decline forcing the Board of directors to review its management strategy for the next 4 years which was ratified at the beginning of the week. Financial and economic crises have forced the Central Bank to take drastic measures to save the value of the Egyptian pound.
A senior official at the Ministry of Finance said the $5billion offer from Saudi Arabia “includes grants, a deposit in the Central Bank of Egypt and oil products”. The amount also includes a billion dollar grant.
Saudi Arabia has been very supportive of the current military backed interim government. A few days after Morsi’s removal in July, Saudi’s finance Minister Ibrahim al-Assaf announced that they will offering an aid package which includes $2 billion to be deposited in Egypt’s Central Bank, $2 billion worth of oil and gas and $1 billion in cash.
Egyptian authorities are faced with managing an economy which no longer attracts investors due to the political instability and frequent violent clashes between the supporters of Morsi and the security forces.
The Egyptian ministry official stated that the “new aid package” will be used to “stimulate the economy and revive suspended economic sectors, especially the construction, tourism and investment sectors, in order to reduce unemployment rates and to reduce the deficit of the state budget”.
Developing the legislative structure of the capital market industry, which comes as the first axis of the strategy, would provide. Head of the bourse, Mohamed Omran, hopes that it will provide “those who are in charge of the market [with] more flexibility without harming the roles of relevant parties”.