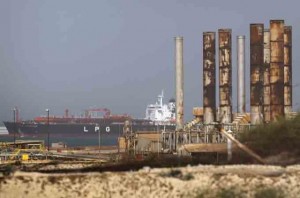 Libyan oil ports in the east are set to open and begin operation after being inactive for months due to the siege of the militias. Operations are expected to begin on Sunday. The announcement was made by Saleh Al Ateiwich; head of the powerful Al Magharba tribe. The decision to leave the ports is tied to conditions which have to be satisfied. The government has not reacted to the announcement which concerns only the ports in the east.
Libyans are expected to welcome the freeing of ports.
At the OPEC meeting held at the beginning of the month in Vienna, Oil Minister Abdelbari Al Arusi told reporters that although “things change” he is hopeful that “in 10days, if everything goes right,” Libya will be producing 1,5million barrels per day. The minister added that the lost production had cost Libya “around $9.0 billion” in lost revenues.
The decision to quit the oil ports was also confirmed by the head of the security guards and an autonomy leader, Ibrahim Jodhrane. He was quick to add that there are conditions to be satisfied by the government in Tripoli.
Jodhrane said “oil exports will resume under 3 conditions” amongst which is the share of the oil revenues for the Cyrenaica region, eastern Libya, and the other two regions. The region wants autonomy. The Tripoli government should also form an independent committee to investigate claims of oil sale corruption.
There remains to be an imminent setback. The oil workers union has threatened that it will close the ports until their payment demands are met. “If the government does not meet our demands, then the union of oil workers will close the ports again after they reopen”, deputy head Saad al-Fakhri of the union warned.