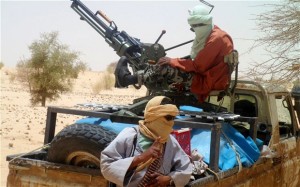 As political parties in Tunisia continue their dialogue to end the standstill in forming a caretaker government, its border control is becoming more porous. The International Crisis Group (ICG) said Al-Qaida is increasing its activities along its borders especially along those that it shares with Algeria and Libya. The North African country is also faced with rising extremism within its borders.
A report entitled “Tunisia’s Borders: Jihadism and Contraband” was released by the ICG on the 28 of November outlining that Tunisia is fast becoming a “trafficking” point for contrabands, drugs, arms and ammunitions. Libya is awash with weapons while terrorists have been active in southern Algeria. Tunisia is struggling to maintain security along its borders after losing control over them, the report stated.
ICG thinks that the more prosperous the trafficking becomes, the more effective the terrorists will be. It also fears that the return of the fighters who went to Syria will boost their numbers and make them more aggressive.
Drug cartels are also exploiting the situation. The report pointed out that “the aftermath of the Tunisian uprising and of the Libyan war has provoked a reorganization of contraband cartels — commercial at the Algerian border, tribal at the Libyan border — thereby weakening state control and paving the way for far more dangerous types of trafficking”.
The border control authorities are reportedly bribed to ease passage. When necessary, the cartels and the terrorists join forces to combat the military and police in order to continue their acticities. ICG has called for the teaming up of neighboring forces to fight against the rising trend.
Tunisia tends to be focusing more on overcoming its political crisis. The powerful UGTT trade union has given political parties 10days to end the deadlock.