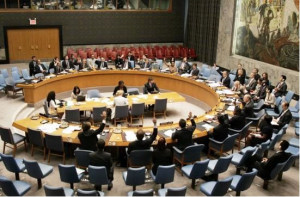 Tripoli has pulled away from the United Nations Security Council proposal to send forces into the country. Although Libya agreed to the plan when it was first proposed, it has now termed it as an “outside interference” and rejects their presence in the country. The Security Council wants the troop to assure the protection of its staff in the chaotic North African country.
Since the uprising against the Gadhafi regime in 2011, Libya has been marred with violence and the present government is struggling to govern the country. The decision not to allow UN troops into Libya was received as a shock by the Security Council.
Britain’s UN ambassador Mark Lyall Grant thinks that they can no longer go ahead with the 235 guard force proposal. He shared his worries regarding the safety of about 200 staff in the UN mission in Libya (UNSMIL) saying “they don’t have a great deal of security and that is something the council takes very seriously and we are waiting for a further proposal”.
However, UN Special Representative in Libya and head of UN Support Mission in Libya (UNSMIL) Tarek Mitri believes they can still persuade the Libyan authorities to accept the proposal. In a released statement, he stated that “the format and size of the guard unit is currently under review, so as to calm some worries and avoid any tendency towards unfounded explanations and assumptions, as well as avoid overstating the significance of an ordinary measure”. It was also stressed that “the task of the guard unit is of limited scope, and that its establishment is an ordinary measure taken by diplomatic missions”.
Libya’s transition has been hit with a deadlock. Militias tend to overpower the government and continue to govern certain regions.