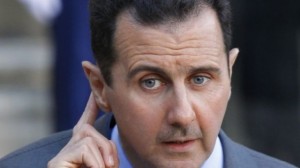 Bashar Assad’s powerful ally, Russia, has claimed that demands for the Syrian president to step down from power have died down because there is no person in the rebel ranks to replace him. The claims were made by Foreign Minister Sergei Lavrov. Reports have stating the domination of the Islamists in the rebel controlled territories.
Minister Lavrov claimed that the best thing for Syria is for Assad to stay in power because he “is less of a threat for Syria than a takeover of the country by terrorists.” The rebels are demanding his departure for peace to return to the country. Lavrov claimed that the western supporters of the rebels are admitting of his stay “not only in private meetings but also in public comments.”
The war in Syria has left millions of Syrians homeless and tens of thousands dead. There is rivalry between the different groups. The Syrian Islamic Front (SIF) is one the latest rebel group to be formed after the alliance of the different Islamist groups. The Al Qaeda-affiliated Islamic State of Iraq and Al-Shams (ISIS) and Al-Nusra Front were not included in the alliance, although Islamic Front brigades have cooperated with them at times on the battlefield.
SIF has the largest brigade in Syria followed by the Al-Nusra Front. The Free Syrian Army (FSA) has been reduced to a minor player on the battlefield. Its headquarters in the north and two warehouses were taken by the Islamists forcing the US and Great Britain to halt lethal aid to FSA.
Pro-government forces have increased their offenses against the rebels while Russia continues to veto any resolution condemning the actions of Assad’s forces. Peace talks to end the war have hardly been effective.