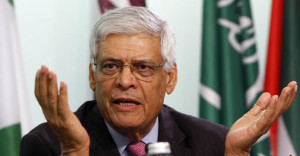 The Organization of Petroleum Exporting Countries (OPEC), which pumps more than a third of the world’s oil, suffered a cutback of oil production over the past year due to outages in Libya and Iraq and Western sanctions on Iran. In order to neutralize this effect, top OPEC suppliers like Saudi Arabia, Kuwait and the United Arab Emirates increased their global oil supply. An eventual return of Libya and Iran means extra oil production for OPEC which could lower oil prices unless other countries cut down on oil production.
The organization has set a collective target for its 12 members to pump 30 million barrels per day, though they are yet to specify each country’s individual share, OPEC’s Secretary General, Abdullah al-Badri said members knew what their shares of overall production should be and “so when Libya, Iran will come back, everybody will know his share.” Iran’s full resumption is no cause for concern according to UAE Oil Minister Suhail bin Mohammed al-Mazroui.
Iraq has long been an issue for OPEC as they ponder if Iraq would concur to an OPEC output cap but “I don’t think there will be a discussion of Iraqi production this year,” conveyed Badri.
A survey this month showed that OPEC’s oil output fell to its lowest in November 2013 since May 2011 from 29.64 million bpd to 29.53 million bpd. Prices are comfortable at the moment for consumers and producers, at around $107 a barrel for Brent crude.
As they are ready to deal with any oversupply, Badri stated on Monday that OPEC will be able to handle the extra oil expected to come from Iran, Iraq and Libya. He said that “when they come, we will accommodate them, and OPEC will be as before.”