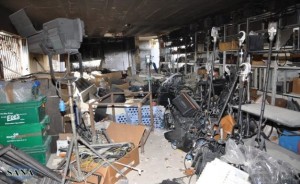 Since the death of former dictator Moamar Gadhafi, Libyan media and journalists have suffered enormous threats and attacks from former rebels. The most recent attack occurred on Wednesday when three rocket-propelled grenades were fired at the Tripoli headquarters of Libya’s Alassema privately owned television channel. Luckily, there was no fatality and the transmission of programs was not affected. The TV channel, in a complex in the Gurji district near central Tripoli, has suffered several attacks notably in March last year, when gunmen attacked the station, ransacked offices and took away the owner and several presenters.
Known for its anti-Islamist stance, the channel has been accused by Islamists for urging people to demonstrate against the General National Congress. Despite opposition by the majority of the population for its inability to halt Libya’s slide into chaos, the GNC on February 3rd decided to extend its mandate till the end of the year.
The headquarters of two private television channels in the eastern city of Benghazi have been included in the list of targets by gunmen. Benghazi, Libya’s second city where uprising against Dictator Moamer Kadhafi first erupted in February, has housed several killing and kidnapping of journalists. The owner-director of a Tripoli radio station was a victim to such killings but the reason behind his murder is still unknown. Also, a victim of such kidnappings was a reporter for Libya’s state media but was lucky to be released a day after.
The Media watchdog Reports without Borders have warned of the threats posed by these former rebel militias that helped topple the Gadhafi regime. Although threats are highest in Benghazi, they exist in other places including Tripoli. The government has put in tremendous effort to restore peace and order.