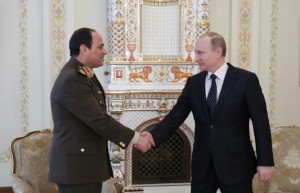 Russian president Vladimir Putin has voiced backing to the Egyptian Field Marshal Abdel Fatah al-Sisi in his bid for the upcoming presidential elections, prompting strong reaction from Washington.
“I know that you have made a decision to run for president,” Mr. Putin said during his meeting held lately in Moscow with the top ranking Egyptian military official who has not yet announced officially his bid.
“That’s a very responsible decision: to undertake such a mission for the fate of the Egyptian people. On my own part, and on behalf of the Russian people, I wish you success”, he added.
The Kremlin chief also expressed Russia readiness to enhance further its cooperation with the most populous country in the Arab world.
The Egyptian defense minister Abdel Fatah Al-Sisi has ousted the elected Islamist president Mohamed Morsi and is expected to win the presidential vote, scheduled for next April.
Al-Sisi’s visit to Moscow is his first trip abroad since the removal of Morsi, supported the Egyptian Brotherhood. The visit was an occasion to discuss several issues related to Egyptian-Russian relations, bilateral economic cooperation, latest developments in the region, the Syrian conflict, the war against terrorism and a Russian arms deal to Egypt, after the suspension of the US military aid.
The Russian arms deal is worth $ 2 billion to be funded by Saudi Arabia and the United Arab Emirates, two major US allies in the region Gulf region, upset by the US soft-power policy towards Syria and Iran.

About Khalid Al Mouahidi 3568 Articles
Khalid Al Mouahidi : A binational from the US and Morocco, Khalid El Mouahidi has worked for several american companies in the Maghreb Region and is currently based in Casablanca, where he is doing consulting jobs for major international companies . Khalid writes analytical pieces about economic ties between the Maghreb and the Mena Region, where he has an extensive network