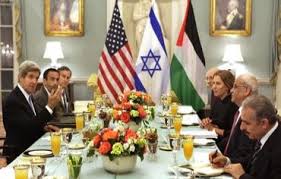 An attempt through negotiations to reach a peace agreement between the Palestinians and Israeli government has proven almost impossible due to an imbalance in conflict. Palestinians claim that the problem doesn’t lie with them but with the Israelis. “The Israelis can reach a peace agreement but they do not want to because according to their religious beliefs, this land belongs to them, which is neither real nor true,” a member of Fatah Central Committee Tawfiq Tirawi said. “Negotiations can reveal to the world that the Palestinians are seeking peace, but that the occupation (regime) doesn’t want it.”
According to Tirawi the negotiations are a means of resistance and it would prove to the world that Israel “along with its American supporters is [sic] arrogant.” He claimed that Israel is practicing injustice against the Palestinians by occupying their land.
When it comes to security, Israel has the upper hand as well since it possess all types of weapons whereas the Palestinians are on a demilitarizing mission. Tirawi asserted the rights of the Palestinians and insisted that they take advantage of it by addressing their case either to the United Nations or by organizing popular resistance activities.
Negotiations to restart the deadlocked peace process between both countries in a US-led attempt started in July. Nonetheless, a major blow was made to the negotiations that were previously stalled when Israel announced plans to build thousands of homes in illegal settlements across the West Bank.
However, the land along with East Jerusalem is an internationally recognized Palestinian territory but has been occupied by the Israel military since 1967. Israel’s settlement policies have been criticized by the international community. The Palestinian negotiating team resigned in protest last November against continued Israeli settlement construction.