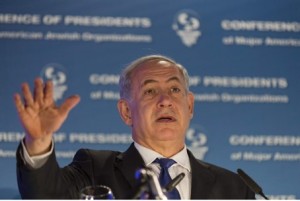 Speaking at The conference of Presidents of Major Jewish Organizations in Jerusalem on Monday, a call was made by Israel’s Prime Minister Benjamin Netanyahu to exert more pressure on Iran to put an end to its nuclear weapons program. He stressed that talks with Iran should be zero tolerance to centrifuges and enrichment in order to prevent the regime from reaching “the capacity to produce a nuclear weapon.” He warned that the Islamic Republic is developing new centrifuges “50 times better” than before and they could reach Europe and the US with “a nuclear payload.” Netanyahu stressed that despite the Islamic Republic’s continuous call for Israel’s destruction “they are being embraced by the world.”
At the conference, long-serving executive vice-chairman of the conference, Malcolm Hoenlein, stated this year’s event is oriented towards “educating” the world about the “dangers of Iran” and combating against terming Israel as an illegal state. A special taskforce on Iran set up by the conference will be headed by Former U.S. senator and vice presidential candidate Joe Lieberman, Hoenlein disclosed at a press briefing.
Regarding boycott attempts against Israel, Netanyahu has accused anyone willing to do so of being an anti-Semite. Concerning peace process with the Palestinians, he stated that “if there is a Palestinian partner for peace, then there is a way to move this forward. We will know soon.”
Following an interim deal reached by Iran and world powers last November, Iran agreed to suspend parts of its nuclear enrichment operations for six months in return for modest sanctions relief. Talks are to be held in Vienna on a permanent settlement of the decade-old dispute over nuclear work that the west, despite assurance from Iran, feared was for military purposes.