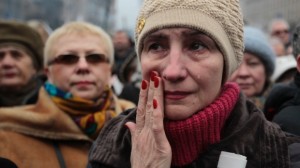 The Finance ministers of G7 have pledged to help Ukrainian government to usher in market-oriented reforms that will restore financial stability, unleash the country’s economic potential meeting the aspirations of Ukrainian people.
The ministers of Canada, France, Germany, Italy, Japan, the United Kingdom and the United States also vowed to provide strong financial support to Ukraine, currently on the brink of war with neighboring Russia after Moscow sent troops to Crimea.
According to the G7, the International Monetary Fund (IMF) is the institution best prepared to help Ukraine address its immediate economic woes. The backing of the IMF is very important for the release of additional assistance from the World Bank, other international financial institutions, the EU, and bilateral sources.
Regarding latest military developments on the ground, the leaders of G7 have issued a joint statement condemning Russia’s violation of the sovereignty and territorial integrity of Ukraine.
They also called on Moscow to settle any security or human rights concerns that it has with Ukraine in Crimea through direct negotiations, and/or via international observation or mediation under the auspices of the UN or the Organization for Security and Cooperation in Europe.
The G7 leaders have urged all parties concerned to behave with the greatest extent of self-restraint and responsibility, and to decrease the tensions.
They have decided to suspend participation in activities associated with the preparation of the scheduled G-8 Summit in Sochi in June, until the environment comes back.
The Leaders of the seven most industrialized countries in the world have said they stand “united in supporting Ukraine’s sovereignty and territorial integrity, and its right to choose its own future”.
According to some experts, it is a strong statement by the G7 which sends a clear message to the Russian president Vladimir Putin to stand-down or face terrible consequences which will undermine the global economy.