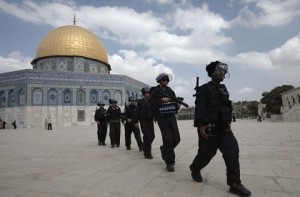 Jordan has issued a warning to Israel after its Housing Minister Uri Ariel, Deputy Leader of the hardline national religious Jewish Home party, paid a short visit to the Old City of Jerusalem. It urged Israel to avoid “escalation in Al-Aqsa” and its violation. Tensions between Jordan and Israel have been tense since the killing of a Jordanian Judge last week. President Peres has made efforts to relax the situation.
Jordan signed a peace deal with Israel and is also recognized as the custodian of the Al-Aqsa mosque.  A government statement presented by Minister of Information Mohammad Momani stated that “Jordan rejects Israeli escalation in Al-Aqsaas well as measures that allow radicals to violate Al-Aqsa under protection of police and occupation forces.” High profile visitors often create violent reactions from the Muslims living in the area.
The spokeswoman for the Israeli police, Luba Samri, said the aftermath of the visit by the far-right Israeli Minister to the Plaza at the Old City was shortly followed by stone pelting before the police intervened to calm the situation. The visit happened at a time when Palestinians and Jordanians still harbor ill feelings over the killing of a Judge RaedZeiter at a border crossing point.
Minister Momani read that such acts will “lead to more violence and religious extremism in the region.” The Al-Aqsa mosque is the third holiest site in Islam. The Jews refer to it as Temple Mount and it is also a sacred site to them. Everybody has access to the area but Jews are not legally permitted to pray at the site.
Jordan as the custodian of the Al-Aqsa “warns Israel not to try to impose anything new related to Al-Aqsa” the statement concluded.