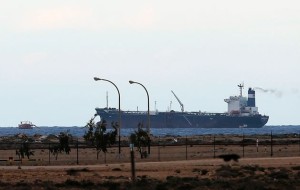 Crisis in Libya have taken a new dimension after the ship that was able to escape the navy was seized by the U.S Navy. The developments have been received with mixed feelings. The head of the self-declared autonomous region, Ibrahim Jathran, has referred to the American navy as “pirates.” Prior to its escape from Libyan authorities, the rebels warned that attempts to stop the ship will signify “a declaration of war.” The international community has been invited to intervene on the issue.
The Libyan government has difficulties to access its oil ports. Majority of them are under the control of the rebels. Jathran claimed on a rebel television station that the oil that the seized tanker was carrying belongs to the people of Eastern Cyrenaica.  Pentagon’s Press Secretary John Kirby said the ship was “carrying a Cargo of oil owned by the Libyan government National Oil Company.” The ship was seized while it was in Mediterranean and not far away from Cyprus. Tripoli has not yet release a statement regarding the issue.
Jathran stressed that they will “continue our fight” and urges the U.S not to transfer the three people on board the ship to Tripoli. He described the Libyan government as “the government of criminal militias.” The rebels claim that the central government is not transparent and ignored the development of oil producing areas.
The Arab League is being called upon to intervene by Jathran. The ship and its crew are likely to be handed over to the authorities in Tripoli. The government is struggling to impose its authority and western powers are worried that Libya might fracture or slide deeper into chaos; despite that these same western powers  have been training Libyan armed forces and cajoling conflicting parties in government to reach a settlement, with little progress.