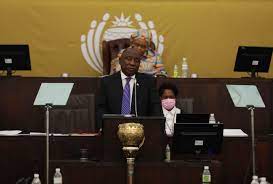 Seven major opposition political parties in South Africa agreed on Thursday to demand answers from President Cyril Ramaphosa over the criminal charges brought against him in connection with the Farmgate scandal.

In early June, former State Security Agency boss Arthur Fraser filed a criminal complaint against Ramaphosa, accusing him of breaching the Prevention of Organized Crime Act by concealing a burglary, which occurred in February 2020 on his private farm, where millions of dollars in cash were allegedly stolen. Fraser explained that “the suspects were kidnapped, interrogated and paid to keep quiet”.

In a joint statement, the seven political parties stressed that “Parliament must hold President Cyril Ramaphosa responsible for the violation of the laws, with regard to what happened in the Phala Phala farm.”

They also said they planned to meet again on August 10 to consider the creation of a committee under Article 89 of the constitution to submit a motion of no confidence in the President.

The South African Presidency had confirmed Mr Fraser’s accusations but denied any criminal complicity, arguing that the head of state was absent to attend the African Union summit in Addis Ababa in February 2020 when the theft took place on his farm.