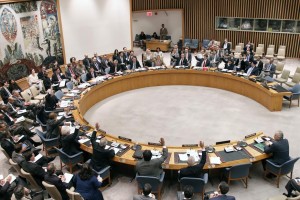 The tussle between World powers over Syria continues at the United Nations after the rejection of a resolution aimed at referring the Syrian war to the International Criminal Court (ICC). Several parties were unpleased with the outcome of the votes and many have concluded that Syrians will continue to be victims of international policies of other countries. China and Russia vetoed the resolution prompting criticisms from the Western states.
The resolution was drafted by France after the UN backed negotiations in Geneva broke down in the beginning of the year. The resolution was supported by 60 countries and 13 members of the Security Council voted for its approval in order to condemn the “widespread violation” of human rights and international humanitarian law by Syrian government forces, as well as abuses by “non-state armed groups.”
Russia and China were against it. Although China didn’t state the reasons behind its actions, the Russian permanent representative to the UN, Vitaly Churkin, called the resolution a “publicity stunt” that will only impede efforts towards a political solution.
The UN seems to be running out of patience as its Deputy Secretary-General, Jan Eliasson, urged Security Council members to “put an end to this long nightmare.” The Syrian government said the resolution is “biased” and meant to “sabotage any chance of peaceful settlement of the Syrian crisis led by the Syrian people themselves.” The Syrian opposition National Coalition called the vetoes a “disgrace.”
Syria is not a signatory to the Rome Treaty which led to the creation of the ICC but the Security Council can refer the case to it. The rejected resolution proposed the presentation of cases to the court based on the evidences collected by the UN Human Rights Council’s Independent International Commission of Inquiry.