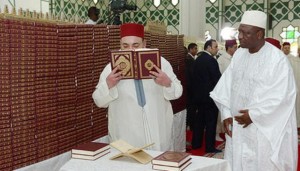 Morocco’s cooperation strategy with sub-Saharan Africa is multifaceted and its commitment in the Sahel region focuses not only on political, economic and military aspects but has also a significant social, spiritual and religious dimension.
The spiritual and religious dimension of this cooperation is all the more meaningful in the volatile context in West Africa, where radical Islamism is spreading. Many analysts actually deem that the Sufi Maliki Islam advocated and encouraged by Morocco is a real counterbalance to extremism and intolerance and gives more weight to the North African country’s unequivocal involvement in the fight against terrorism.
Out of this constant concern to promote a moderate Islam, Morocco has recently launched the construction of a new religious training center that will train imams and preachers (morchidines and morchidates) from across the region in keeping with the values of an open, moderate form of Islam as advocated by Morocco.
The new institute, dubbed The Mohammed VI Institute for the Training of Imams, Morchidines, and Morchidates is part of Morocco’s efforts to promote religious moderation and tolerance in the region, as well as a culture of understanding and inter-faith dialogue.
The religious institution will train imams from Cote d’Ivoire, Gabon, Guinea, Libya, the Maldives, Mali, and Tunisia.
The launch of the new center construction takes place less than four months after Morocco signed with Mali an agreement providing for the training of 500 imams. Several other countries in the region have requested Morocco to provide similar training programs for their preachers.
Morocco’s key role in defining religious space as a means of fighting growing extremism and promoting the values of tolerance has been repeatedly hailed by major powers including the United States.