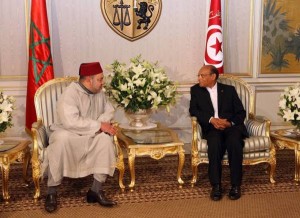 The official visit King Mohammed VI of Morocco is currently paying to Tunisia provides an opportunity for both countries to seal a win-win strategic partnership and translates Morocco’s support to the political transition in the Maghreban country which is slowly recovering from the turmoil that followed the popular uprising which overthrew President Zine el-Abidine Ben Ali in 2011.
The Kingdom’s support is all the more important that the situation has not completely subsided. Tunisia faces real security challenges. It is struggling with its domestic jihadist threat, as evidenced by the Wednesday attack against the family home of the Tunisian Interior Minister by a group of masked gunmen, and cannot control its porous borders with Libya, still at grip with the reverberations of what has been hastily called the Arab Spring, nor can it control its borders with Algeria where terrorist groups are still active.
Some analysts explain that the invitation extended by Tunisia’s Moncef Marzouki to King Mohammed VI to pay an official visit to his country translates the President’s concern first to have balanced relations with all neighboring countries and second to benefit from Morocco’s successful experience in several realms and from the multifaceted reforms it embarked on long before 2011 and which enabled the Kingdom to avoid the shocks and aftershocks of the Arab Spring.
However, if the Moroccan-Tunisian summit meeting will probably focus on bilateral political relations, although these relations are excellent and have always been shielded from regional contingencies, a special emphasis will be laid on regional geo-strategic issues and on the high cost the Maghreb region is paying because of the stumbling Maghreban integration. The project to set up a union between the five Maghreb countries (Algeria, Libya, Mauritania, Morocco and Tunisia) was launched in the eighties of the last century but was never fulfilled because of the conflict between Algeria and Morocco over the Western Sahara.
Pending the revival of this long-awaited Maghreban union, Morocco and Tunisia are determined to explore their respective strong trade potential to boost commercial flows, which remain quite low, between the two countries.
As the two countries’ economic operators and businessmen share the same determination, they held a forum in Tunis on the eve of the King’s visit.
During the forum, some 200 members of the two countries’ employers’ associations, the General Confederation of Enterprises of Morocco (CGEM) and the Tunisian Union of Industry, Trade and Handicrafts (UTICA,) agreed on the need to strengthen their cooperation and to boost trade between the two Maghreb countries.
They thus adopted a package of measures to stimulate economic exchanges and increase investment flows between the two states, such as increase the exchange of trade missions, strengthen B to B contacts, reduce the financial costs of bilateral trade, and develop common guidelines for import and export procedures.
They also emphasized the need to establish a development committee on trade of goods and services with high added value and to create a database of investment opportunities in the two countries.
They likewise called for removing non-tariff barriers, import licenses and quotas and for submitting joint bids to tenders from other markets.
The royal visit and the economic forum show, if need be, that Rabat and Tunis, whether at the official or at the private level, are resolved to strengthen their political ties, diversify and enhance their economic relations and promote a strategic win-win partnership.