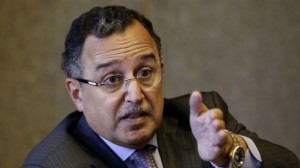 The Egyptian foreign minister Nabil Fahmy met with the United States Ambassador to Libya David Satterfield before having a head to head discussion with the Arab league envoy. Libya was among the subjects discussed with them. Egypt has stressed that it continues to be deeply concerned by what is going on in Libya as it hopes for a quick return to democracy.
During Fahmy’s discussions with Ambassador David Satterfield, means of ending the violence in Libya was of a major importance.  In a statement released by the ministry, the American ambassador explained that the U.S is interested in seeing a return to stability in Libya and supports that policies linked to reconciliation, sharing power and wealth among the people should not be omitted by the next government.
Ambassador Satterfield plays an important role in Egypt as he doubles as the coordinate with regional and international envoys, such as those of the United Nations and European Union, to stipulate basic governing principles for Libya, based on repelling violence and terrorism and enabling control of the Libyan government.
In a separate meeting with the Arab League’s envoy, worries over the detoriating security situation and the increasing political division was at the center of their discussion. Libya is yet to have an effective government since the departure of Gadhafi. He added that a plan should be put to regulate its borders and acquire political and security stability.
The Egyptian Minster urged the different parties at war in Libya to settle their differences through negotiations. He believes that the Libyan people should choose their own destiny and maintain the unity among them.
The foreign minister stressed on the importance of coordination between the international community and Libya’s neighboring countries to end the violence.