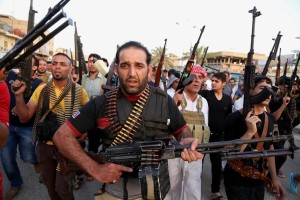 “The liberation of Baghdad is around the corner. Everyone should contribute, to the extent of his ability, to complete the liberation of the beloved country, because there is no honor or dignity without its liberation.” These were the words of an audio recording released on a pro Baath Party website. 72-year-old Izzat Ibrahim al-Douri, Saddam Hussein’s Vice-President during the U.S led invasion of Iraq, is believed to be the person speaking.

The audio is 15minutes long and the voice is similar to that of Al-Douri when compared to tapes released in his name. There hasn’t been any confirmation of the voice on the tape. The recording was dedicated towards rallying fighters behind the Islamic State of Iraq and Syria (ISIS) and the removal of the “Persian, Safavid colonization; ” a term used to make reference to the Shiite-led government of Prime Minister Nouri al-Maliki.

Pressure continues to mount in Baghdad as fighting between the government forces and ISIS fighters is taking place almost 80kilometres away from the capital. The call was made to “join the ranks of the rebels who liberated half the country” to attain their objective of reaching Baghdad. He referred to the fighters on the battleground as “heroes and knights of al-Qaeda and the Islamic State (ISIS).”

The Iraqi forces have been too weak to pull back the ISIS. Several groups are fighting against the regime but the tape urged for unity among them in order to oust the regime. Meanwhile reports from Agence France-Presse have stated that militants have taken over part of the Iraqi town of Dhuluiyah on Sunday as a new drive towards the capital entered its third day. Baghdad will be hoping to repel the attacks before it is too late.