Libya has decided to close its airports for “technical reasons” after fighting in creased in the capital during the weekend. The International airport in the capital has been closed for three days, starting from Sunday, after the armed group which controls it was attacked. The closing of three airports is considered to be a precautionary measure because Tripoli International Airport serves as the headquarters of Libya’s airports in the western region. Flights to Misrata have been suspended after deadly clashes engulfed the city. 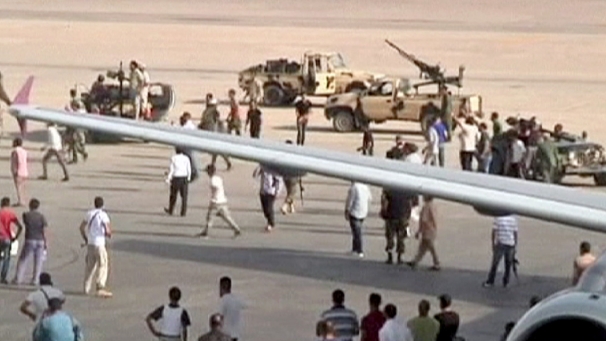 An airport official who wants to remain anonymous said the “Libya is now practically cut off from the outside world.” More airports are expected to be close in the following days namely Misrata, Bayda and Tobruk which are all located in the east.

The attack on Tripoli’s airport occurred on Sunday. Islamist militias have claimed to be responsible for the unsuccessful attack. The Zintan militia controls the airport and other principal infrastructures. They have come under attack in the various sites that they oversee. Zintan is regarded as a well-armed anti Islamist rebel group which is under the jurisdiction of the defense ministry.

Security and stability in Libya has been a major challenge for the government. Weapons which were used during the uprising against the Gadhafi regime still fill the streets thereby driving the country into a situation close to lawlessness. The government’s authority is continuously challenged while political parties continue to jostle for power.

The mounting violence has forced the United Nations Support Mission in Libya to announce last week that it was pulling out dozens of staff. The embattled government has struggled to establish a strong army and police force, giving former rebel groups a free hand to act.