The last year rebellion in Central Africa Republic by the Seleka rebels, a Muslim rebel group, which toppled the elected government of Francois Bozize is making its comeback. It has attacked government officials in the northern part of the country in a bid to re-exert control in the area. The actions of the Seleka rebels during their short reign in power led to a sectarian cleansing in the country after the anti-balaka, which began as a vigilante group for Christian ethnic communities, forced them out of the capital. A transitional government is currently administering the affairs of the country but insecurity continues to be a major issue. 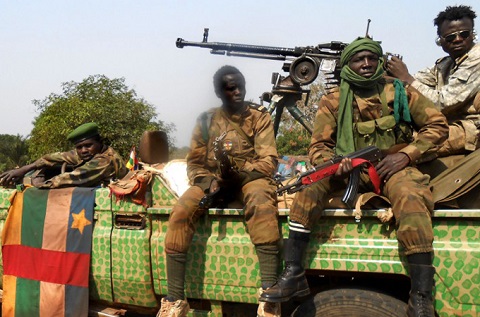 After the withdrawal of the Seleka rebels from Bangui, they sought refuge in their bases in the north. Spokesman Modibo Bachir Walidou of the transitional government said that the government’s efforts to exercise its authority in the whole country have been dealt a setback when the Seleka rebels attacked officials who were taking up their posts. No casualty has been reported but three of them are being treated from gunshots.

Peacekeeping forces are in the country but they are mainly present in major cities. They have been able to maintain calm in and around the capital.

The attack came at a time when plans are underway for the anti-balaka activists to lay down their arms. Former government minister and chairman of the country’s football federation Patrice Edouard Ngaissona during the weekend told a general assembly of anti-balaka activists and sympathizers that the movement will be transformed into a political party. He said they should look forward to a better future. Ngaissona is considered as one of the key figures behind the vigilante network.