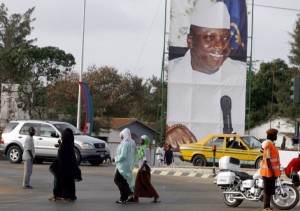 Reports have claimed there has been a failed coup d’état attempt in The Gambia although the Government has issued a statement denying the reports.

President Jammeh was out of the country when the Statehouse came under attack by men believed to be led by Lamin Sanneh, a former state guard commander.

There have been contradictory reports about the attack. The Government issued a statement which didn’t describe the gunshots heard from 1am to 3am on Tuesday morning in Banjul as an attack but rather as “rumors being circulated” and gave assurances that “peace and calm continue to prevail.”

Businesses have been closed for the day and access to the capital is reportedly blocked by the military while armed patrols have also been noticed on the main streets.

The whereabouts of the president continues to be unknown. There have been reports that he was in Dubai and was spotted in Chad to refuel his aircraft as he was on his way to Banjul although contradictory reports also claim that he has headed for Saudi Arabia.

The BBC quoted a presidential statement saying a “disgraced” former soldier, Lamin Sanneh, invaded the country from Senegal “in an attempt to overthrow its legitimate government.” It added that “the Enemies of the People have been defeated.” Although the statement said Jammeh is in France, French officials have denied such claims.

Information surrounding the whole issue continue to be blurry in a country where the media is strictly controlled with many preferring to be mute on political issues. Jammeh came to power in a coup d’état in 1996 and won the elections two years later. Since then, he has been re-elected thrice.