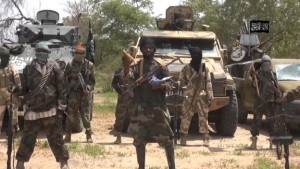 Nigeria has received a heavy blow from Boko Haram which has taken over its Baga military base near the Chadian border. The base which also shelters international forces came under attack during the weekend. Most of the north eastern part of the country is now under the control or influence of Boko Haram.

According to a military source who spoke to the press, the Saturday morning attack caught the soldiers by surprise. He described the situation as really bad. Eyewitnesses claim that the exchange of fire between Boko Haram and the military lasted for several hours. The base is located outside the town of Baga. It is used by the Multinational Joint Task Force (MNJTF), which was established in 1998 to battle cross-border crime but had its mandate expanded to fighting the deadly Boko Haram insurgency. MNJTF is made up of forces from Nigeria, Chad and Niger. Many of the Soldiers and civilians have fled to seek refuge in Chad.

At the end of last year, Boko Haram attacked a Cameroonian military base near the border with Nigeria. It was able to take over the base but only for a few hours before airstrikes forced its militants to flee into Nigeria.

Boko Haram wants on set up an Islamic State in Nigeria. Since its inception in 2009, the group has terrorized villages, schools and government buildings. More than 10,000 people are believed to have lost their lives from its attack which includes bombing public places, killings of civilians, abduction of young people.

President Jonathan has been criticized for not doing enough to fight the extremist group. The country is preparing for elections this year and he is expected to lose to former military head of state, Muhammad Buhari.