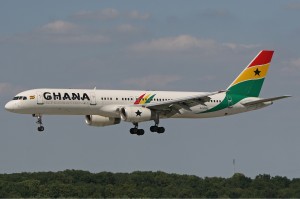 The government of Ghana will launch a new national airline in the first quarter of 2015.   The new national airline is expected to take off by March this year. According to Joy FM, a local radio based in Accra, which published the information, that would happen after accounting firm Price water house Coopers has presented its interim report on the proposed national carrier to government. The firm was contracted in 2014 to work out modalities for the new carrier for the country.

The Deputy Transport Minister, Joyce Bawah-Mogtari, confirmed to Joy FM that the government is planning to have the new airline from March 2015. She said Price water house Coopers is going to advice on credible strategic investors in the airline.

“Chances are that it might be an existing airline with a seriously obvious brand…it might be one of our domestic carriers that is willing to partner government to bring back this airline”, said Bawah-Mogtari.

She said although the time looks short, government is committed to ensure the national airliner will take off in March.

“Three months is a long time for a lot of things to happen and government has actually indicated its preparedness to this in the shortest possible time”, she said.

According to preliminary figures on scheduled services released by the International Civil Aviation Organisation (ICAO), some of 3.2 billion passengers have used air transport for their business and tourism needs in 2014. The annual total passengers were approximately five per cent compared to 2013 and are expected to reach over 6.4 billion by 2030, based on current projections.

The report, which was made available by the Ghana News Agency on, said aircraft departures reached 33 million globally during 2014, establishing a new record and surpassing the 2013 figure by roughly one million flights.