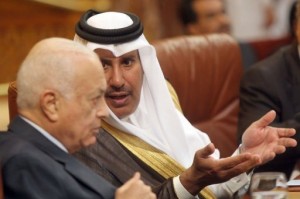 Cairo plays host to a two-day meeting between opposition groups of the Assad regime under the auspices of coming to a conclusion of the proposed UN transitional government peace plan. The meeting is hosted by the Arab League for the first time but organized by the Syrian National Council, Syria’s principal exiled opposition group, and other smaller groups but has been criticized and boycotted by the Free Syrian Army amongst others.
With the division of oppositions evident and the new UN plan over the weekend deepening their differences, the Secretary General of the Arab League, Nabil Al-Arabi, has appealed for unity among the opposition as he begged “that this opportunity must not be wasted under any circumstance” before reminding them that “the sacrifices of the Syrian people are bigger than us and more valuable than any narrow differences or factional disputes.” He showed his disappointment at the transitional government plan saying that it wasn’t what was expected by the Arabs.
Dubbed as a “conspiracy” by the boycotted opposition groups, they released a joint statement showing their determination of disassociation with the Cairo talks because they “refuse all kinds of dialogue and negotiation with killer gangs” and rejection of any imposed “Russian and Iranian agendas” on Syrians. They are yearning for a foreign military intervention and in other words, want the application of the same strategy used to oust Ghadaffi in Libya.
The talks attended by almost 250 members of the opposition fraternity are aimed at drafting up an international plan for the UN plan and Tuesday will be dedicated to a meeting with the foreign ministers of member countries of the Arab league.