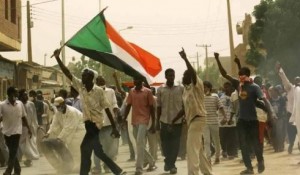 Clashes continue at the Diem Mansour area, south of Kurmuk close to the Ethiopian border, between rebel and government forces in the Blue Nile State in renewed efforts by the former to take over the area again.
Government forces are claiming the upper hand as the military spokesperson, Col. Al-Sawarmi Khalid Saad, said that the rebels have suffered heavy casualties amongst which a Major in their ranks before being forced to pull back. The rebels on their side promised a cease fire if El Bashir is ousted from power as they try to encourage and support protesters against the recent economic austerities. Claims are hard to be justified because of strict restrictions to the area which also affects the distribution of food aid to those caught in the clashes. More than 200,000 are believed to have sought refuge in South Sudan and Ethiopia.
Blue Nile State Governor, Retired Major General Al-Hadi Bushra has dissolved the state government and terminated the services of all ministers, consultants and commissioners. He has issued decisions appointing caretaker ministers and commissioners to serve until further notice.
Sudan also accused South Sudan of supporting the Justice and Equality Movement fighting in Darfur as they prepare to launch an attack in some areas of southern Kordofan but the military spokesperson warned that they are well prepared to neutralize any attempt as they continue to follow rebel activities. He added that “all indications show the existence of continued support from South Sudan to the so-called JEM and other armed movements”. South Sudan has always denied such accusations.
Reports emerging from Sudan claim a recent mass defection of militants of the Justice and Equality Movement who were abducted in northern Kordofan and forced into training camps have presented themselves to local authorities.