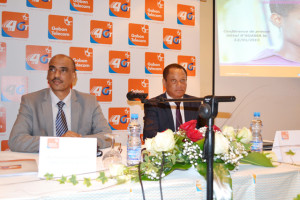 Gabon Telecom with the aim to “encourage traffic and the use of ICTs” in Gabon, has recently initiated a new “aggressive marketing strategy” based mainly on a considerable decline in communication via landline rates. The strategy announced by Lhoussaine Oussalah on the 12th January, which stands on a lower calling rates from 45% for calls from fixed lines to mobile phone and 58% for international calls. According to Oussalah, this new marketing strategy will permit to Gabonese to have free call over one year for calls from fixed line to fixed line.

“For the Internet, we will offer exceptional packages for both ADSL for mobile”, said the General Director of Gabon Telecom, who said that his company’s aim is to become “the cheapest operator in central Africa”, thanks to” lower prices of Internet access, FO 2Mbps to 250,000 FCFA, while doubling the broadband to free for enterprise “and” lower charges for ADSL 2 Mbps to 15,000 FCFA.

According to Lhoussaine Oussalah whose promises seem to convince the President of the Regulatory Authority for Electronic Communications and Posts (ARCEP), the strategy of Gabon Telecom for 2015 is to “maintain its generous policy,” while strengthening its position as the first telecom partner for companies, not without further work on the expansion of the 3G / 4G in the country. For the marketing director, “The year has a shaping gift” for Gabon Telecom subscribers, who said, think about ways to implement the expansion of its fixed telephony network in non-coverage areas.