President José Eduardo dos Santos of Angola welcomed his South African counterpart Jacob Zuma in Luanda as the two countries work towards boosting the relations between them. 22 agreements were signed at the end of the visit and some of them were specific about the two head of states having an annual meeting to review their bilateral cooperation in various fields. 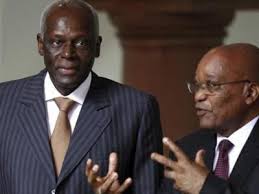 Cooperation will be focused on trade and industry, energy, science and technology, minerals, defense, tourism and sport. Angola exports oil to South Africa and imports industrial machinery, food and other products from the latter. Trade between them is estimated at $10 million.

Efforts are also being made for political and economic integration under the umbrella of the South African Development Community (SADC) and other regional bodies.

A source revealed that the military, political and security situations in the Democratic Republic of Congo (DRC) were also discussed by Zuma and Santos. U.N peacekeeping forces were mandated to neutralize the rebels in DRC after numerous attacks on remote villages.

A released joint statement after the meeting of the two Head of states mentioned that an agreement has been reached to set up a permanent framework for the trilateral mechanism of South Africa, Angola and Congo.

President Zuma’s visit to Angola on Wednesday came after he met with President Alpha Condé of Guinea a day earlier. He will be travelling to Mozambique on Thursday to attend the inauguration ceremony of President-elect Filipe Jacinto Nyusi of Mozambique.

Political analyst, Abdul Patel, said Zuma’s visits have been well planned. He opined that “there is no doubt that these visits are to clear the political road for further SA economic and business interests in those countries.”