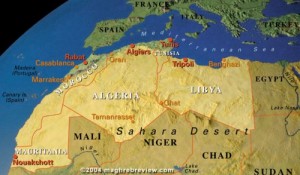 Maghreb countries have finally realized that joining efforts to fight terror groups and criminal networks operating in the region is of paramount importance to the security and stability of each and every country of the region.
To discuss ways and means to counter this serious threat, the Foreign ministers of the five member countries forming the Arab Maghreb Union (UMA), namely Algeria, Libya, Mauritania, Morocco and Tunisia, are gathered this Monday in Algiers.
The meeting will ponder on “the threats endangering the security in the Maghreb region and define the broad lines of cooperation in this area”, An Algerian official said on the eve of the meeting, decided by the Maghreban foreign ministers at their latest meeting held in Rabat last February.
This meeting was long overdue, but better late than never. The five UMA countries all border the Sahara-Sahel region where smugglers, weapon and drug traffickers, money launderers and extremist groups with links to al-Qaida are thriving. A rise in extremism has led to a surge in deadly attacks and kidnappings by groups linked to al-Qaeda, sparking fears of a new “arc of terror” on the continent.
For this reason, the Algiers meeting was described by some observers as “unprecedented” and of “paramount importance” as it is taking place at a moment the Sahara-Sahel region is on the brink of chaos.
The huge quantities of weapons looted from Khaddafi’s depots, smuggled out of Libya and sold on the black market have flowed to rebels and islamist groups, who have openly allied with the Al-Qaeda franchise and who now control northern Mali, such as Ansar Dine and MUJAO (The Unity Movement for Jihad in West Africa). They were also purchased by Al Qaeda in the Islamic Maghreb (AQIM), which grew out of the Algerian Salafist Group for Preaching and Combat and which was involved in drug trafficking and the kidnapping of westerners for ransom.
Part of these weapons ended up in the hands of militants in Chad, Niger, Mali, in the hands of elements of the separatist Polisario Front in southern Algeria, as well as of Salafists in Tunisia and Egypt.
If left unaddressed, and if the countries of the region do not join efforts to stem this dangerous flow of weapons and to fight the terrorist groups, this will surely lead to a transnational destabilization of the whole region, where the Mali meltdown is already an illustration of the harm armed militants can do.
For all these reasons, the Algiers meeting should not be a mere formality but should come out with concrete measures to challenge the terrorists and foil plots to set up failed states in the region.