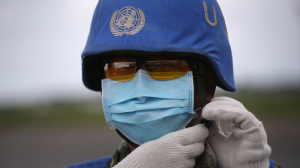 The International Monetary Fund has decided, on the 5th February, to grant US $100 million gift to Guinea, Liberia, and Sierra Leone, the three most affected countries by the Ebola crisis in West Africa. The IMF, urging similar action from other international creditors to help the countries deal with the economic fallout of the epidemic, additionally offered the nations US $160 million in zero-interest loans, subject to the board approval. This will add to the US $ 130 million already disbursed in September 2014.

“It is not in our traditional activities to make donations. (…). But we do it because these three countries have gone through an extremely difficult time, “said the IMF Managing Director Christine Lagarde.

“Those three countries are going through a very, very dramatic ordeal that combines pandemics, the risk of isolation” and the potential of the virus to spread, IMF Managing Director Christine Lagarde told reporters. “This gives it a very broad scope and constitutes a significant threat.”
The $ 100 million gift, which is part of an anti-Ebola plan of $ 300 million announced in November by the Group of the 20 major economies to help stem the Ebola outbreak and support the three West African countries, should allow them to clear the debt and the interest they have to IMF in the coming years, said the spokesman of the Fund, Gerry Rice. This gift will be served to the three countries via a new fund created by the IMF to help countries deal with epidemics.
“Essentially, a global social safety net is now put in place to protect the least developed countries when they experience disasters,” said Eric LeCompte, executive director of the Jubilee USA Network, which campaigns for debt relief for poor countries.
The $100 million grant would allow each country to service their IMF debts over the next two years, the Fund said.