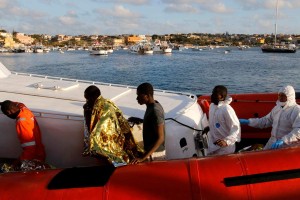 Four dinghies tried to cross from Libya. Only 9 people could be rescued on Sunday by the Italian Coast Guard on Lampedusa Island; 29 died of hypothermia. Survivors alerted rescuers that three more similar boats had left at the same time. On Wednesday, at least 300 were dead, dozens feared lost at sea.

“They are new, unharmed after four days at sea. 203 others were swallowed by the waves,” announced earlier on Twitter by Carlotta Sami, spokesman for Italy of the UN High Commission for Refugees (UNHCR), citing a “huge and horrible tragedy.”

According to the information obtained by UNHCR, four inflatable boats have simultaneously left on Saturday the borders of Libya, each carrying one hundred migrants from sub-Saharan Africa, mostly men but also teenagers.

The weather conditions were hellish yet in that area during the weekend: the Italian Coast Guard spoke of waves of eight meters and winds of 120 km/h.

Wednesday morning, the Coast Guard found nine new survivors at Lampedusa. Two of them were on the second boat, and seven in the third. The dates and circumstances are not yet established, but their story is clear on one point: all of their travelling companions are drowned.

And we have no news about the fourth boat. “We still hope that it has not been able to leave, or that it has turned around,” told Barbara Molinaro, a spokesman for the UNHCR in Rome to AFP but the International Organization for migration (IOM) was more pessimistic.

2014 was a year marked by more than 3,200 deaths in the Mediterranean Sea. This new tragedy confirms according to IOM another dramatic year with 44 migrants have died and 42 others disappeared off Libyan, Italy, Malta, Spain and Turkey coasts since January.

Indeed, the winter does not deter the migrants. According to the Italian Interior Ministry 3,528 migrants have arrived in January, nearly 40% more than in January 2014, a record year with a total of over 170,000 arrivals.

According to AP, Laurens Jolles, the U.N agency’s representative for southern Europe, echoed the sentiments, saying: “The Triton operation doesn’t have as its principal mandate to save human lives, and thus cannot be the response that is urgently needed.”

While Italy’s Mare Nostrum — meaning “Our Seas” — took its patrol boats right up to the Libyan coast, the EU operation stays only a few miles off the European shores, its job is to protect European borders.

Save the Children and Amnesty International were among a number of non-governmental organizations to also voice concerns about the effectiveness of Triton, AP reported.