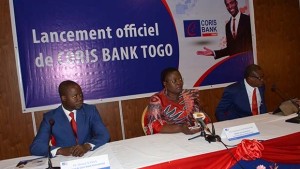 After Burkina Faso in 2008, Côte d’Ivoire in 2013, Mali in 2014, the Coris Bank International (CBI) has just opened its fourth branch in Lomé, Togo. The activities of Coris Bank-Togo were officially launched on Friday in Lomé by the Minister of Trade and Private Sector Promotion, Bernadette Legzim-Balouki in the presence of Resident Representative of the International Monetary Fund ( IMF) in Togo, Idrissa Nassa, the chairman of the CBI, Seydou Sanou, the General Director of Coris Bank-Togo, corporate and traders manager.

“The establishment of this bank in Togo, shows confidence and recognition of the efforts made by the government to revive the national economy, the creation of a favorable climate and the consolidation of economic activities” said the minister.

Mr. Nassa has input from recognized game it is the policy of business facilitation initiated by the government which played in favor of the choice of Togo where the banking rate is 8%.

“The Doing Business Report of 2015 highlights the outstanding performance and establishes Togo a third country that has made the most reforms to improve the business climate. In our capacity as an investor, that “are performance that we pay attention and salute at fair value”, said Mr. Nassa.

Launched in 2008, Coris Bank has reached 500 billion CFA francs ( $ 762 million) of total consolidated balance sheet at the end of the year 2013. In Burkina Faso, the Bank has thirty agencies in the country and occupies 18% of the market share.