Tension is seemingly escalating between Morocco and Nigeria as Morocco recalled its ambassador in Abuja on Tuesday for consultation, less than a week after King Mohammed VI refused to talk over the phone to Nigerian President Goodluck Jonathan. 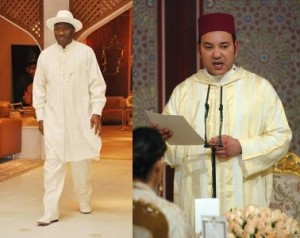 The announcement was made by the Moroccan Foreign Affairs Department in a statement.

The department flatly denied that the King ever spoke with the outgoing president as claimed by Nigerian Authorities.

“Contrary to the Nigerian authorities’ claims as conveyed to the Moroccan ambassador in Abuja and to the local media, the Kingdom of Morocco confirms, in the clearest and strongest terms, that no phone conversation ever took place between H.M. King Mohammed VI and the president of this country,” said the statement.

The Nigerian Foreign Ministry had actually denied the King’s refusal to talk to Mr. Jonathan and told the Moroccan diplomat as well as the local media that the phone exchange between the two heads of state did take place.

Morocco denied the Nigerian Foreign Ministry’s claims and the Nigerian press reports and insisted that the king “had actually turned down the Nigerian authorities’ request as it comes in a context of internal electioneering manoeuvers and also because of this country’s very hostile standpoint regarding Morocco’s territorial integrity.”

The statement which expressed amazement at the Nigerian claims denounced these practices as “unethical and contrary to the spirit of responsibility that should prevail in relations between states.”

King Mohammed VI had deemed it inappropriate to have a phone conversation with Nigeria’s Goodluck Jonathan, as requested by the Nigerian presidency, at this point of time when Nigeria is in the full swing of the presidential elections campaign.

Mr. Goodluck Jonathan is candidate for a second term in the upcoming elections slated for March 28.

Morocco does not want to see the presidential candidate’s campaigners exploit the phone talk politically, especially vis-à-vis the Muslim majority of Northern Nigeria.

Besides the electoral context in Nigeria, Moroccan authorities explain the King’s refusal by Abuja’s stand on the Western Sahara issue and its longstanding hostility towards Morocco since Abuja recognized the Polisario-proclaimed Sahrawi Republic in 1984.

Morocco recovered the disputed Western Sahara territory that was formerly under Spanish rule in 1975 but its independence is claimed by the Algeria-backed Polisario Front.

The UN is conducting mediation efforts to reach a mutually acceptable political solution, but these efforts are hampered by the Polisario, which sticks to the obsolete option to organize a self-determination referendum. In 2007, Morocco put forward an initiative proposing to grant the territory a large autonomy under its sovereignty, but the plan was rejected by the Polisario.