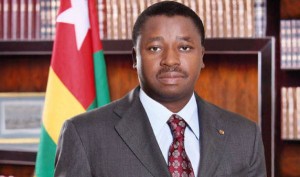 Togolese incumbent President Faure Gnassingbe, 48, in power since his father Gnassingbe Eyadema passed away in 2005, is presented as a firm favorite in the presidential elections taking place on Saturday.

If he is elected for a third term, and he surely will, President Faure Gnassingbe will run the West African country for five more years.

Many Westerners settled in Lomé contacted by Medafrica over the phone believe that the Togolese 3.5 million voters will massively vote for Faure Gnassingbe (Union for the Republic) because they are sure that continuity is the best guarantee to their country’s peace, security and serenity.

“People are afraid of the unknown. They feel more comfortable with what they know and do not want to lose what they have,” one of our interlocutors said. According to him, the incumbent President will be easily re-elected because the Togolese people do not wish to see their country disintegrated into chaos, as was the case in many States.

They know that their country needs unity, cohesion and social peace and that over the years, President Gnassingbe has tirelessly worked to achieve this.

He said even Gnassingbe’s opponents admit that under his rule, the country has scored tremendous progress and embarked on a set of positive reforms, primarily in matters of Public governance, freedom of speech, social progress and improvement of infrastructure, mainly roads.

Despite the recognized positive results, President Faure Gnassingbé wants to do more for his country as told by his electoral slogan “on the way to progress” and extends all necessary backing to reformist forces.

Our sources also seemed convinced that the 2015 elections are different from previous polls that were criticized as being unfair and marred with fraud.

Another argument supporting Faure Gnassingbe’s ineluctable victory is that the opposition is weakened by divisions and contentions and could not agree on a single candidate likely to attract all the voters of the opposition parties.

Besides the outgoing president, the other presidential candidates are opposition leader Jean-Pierre Fabre of the National Alliance for Change, Aime Tchabouré Gogué, representing the Alliance of Democrats for Integral Development (ADDI), Mouhamed Tchassona-Traoré, president of the Patriotic Movement for Democracy and Development (MCD) and Komandega Gerry Taama from the New Togolese commitment (NET.)

According to observers, all these candidates have no chance to be anywhere near victory. Even the opposition leader Jean-Pierre Fabre, who was defeated by Gnassingbé in the 2010 elections and who is believed to be the main challenger in the current race, would come a distant second in the elections.

Observers also explain their optimism as to the victory of Faure Gnassingbe by the electoral system in Togo which is favorable to the incumbent President.

The president of Togo is elected by universal suffrage in a single round of vote. The candidate who wins the largest number of votes among all candidates is declared winner, no need to gain more than 50% of votes.

Awaiting the results of the polls, which will bring no great surprise, the observers supervising the polls have lauded the peaceful unfolding of the electoral campaign and of the vote.