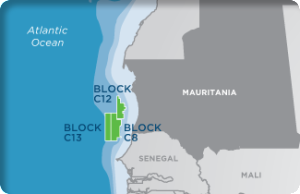 US Kosmos company currently owns a 90 percent interest in the site where the gas was discovered along with “Société Mauritanienne Des Hydrocarbures et de Patrimoine Minier” (SMHPM) which holds 10 percent.

Since 2012, Kosmos has held rights to conduct exploration in the blocs C8, C12 and C13 under production sharing contracts with the Government of Mauritania. In March 2015, “Chevron Mauritania Exploration Limited”, a wholly owned subsidiary of Chevron Corporation acquired a 30 pc non-operated interest in the C8, C12 and C13 contract areas.

Mauritania’s state oil company said further drilling will be carried out in the next few days to confirm the scope of the discovery. Mauritania produces than 5,000 barrels of oil per day.