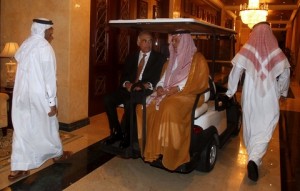 The Arab League has decided to take its dealings concerning the Syrian crisis to the General Assembly of the United Nations. These revelations were made by the envoy of the Kingdom of Saudi Arabia to the UN as he said that the oppression of the Syrian citizens must come to an end because according to him, Assad’s “regime operates by killing those in the country who oppose it.”
The Arab states will also be asking for a resolution to be voted against Syria because of the chemical weapons that it considers to be a threat. The resolution will be deposited in a few days time with hopes that voting will be scheduled to take place in as early as next week. The Saudi envoy to the UN has also made it clear that nothing will be left out because the file will be composed of all the relevant issues to the Syrian situation.
The Arab nations have been frustrated in their efforts to settle the Syrian crisis through the ousting of Assad but the U.N. General Assembly cannot force legally binding sanctions, like the 15-nation Security Council. However, no country can veto any of the General Assembly’s resolutions which just need a majority. This new strategy will allow them to bypass the Russian and Chinese vetoes.
Taking in to account that the unrest has been going on for more than a year, the Arab League proposal also includes humanitarian access to the country. Thousands of people have lost their lives and many have been living as refugees in neighboring countries with no sign of the fighting coming to an end very soon.