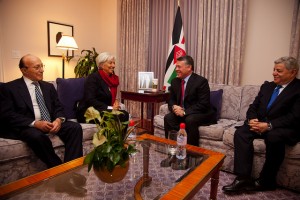 The Jordanian government will receive a $ 2 billion financial assistance from the International Monetary Fund (IMF) to enable the Hashemite Kingdom carry out its ambitious political & socioeconomique reform program in a tumultuous middle east.
This lifeline loan, which has been approved in principle by the IMF staff, still needs the endorsement of the Fund executive board.
The IMF says it agrees to support Jordan reform agenda and economy which has been hit by disruptions of natural gas supply from Egypt due to the sabotage acts of the Sinai pipeline and waves of refugees crossing the border from war-torn Syria. At the same time, the global economic downturn affected the country’s tourism, worker remittances and FDI.
To protect consumers from soaring energy prices, the Jordanian authorities increased subsidies, social spending and wages. But these steps deepened the Govt deficit which was exacerbated by the need to provide housing and medical services to refugees from Syria.
“To avoid sharp adjustments that could adversely affect growth and the vulnerable population and to guard against additional shocks”, Amman asked for the IMF backing.