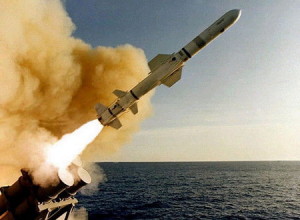 Egyptian navy braces to receive 90 Harpoon Block II missiles, one of the most advanced anti-ship cruise missiles in the world. These missiles worth over $ 145 million will boost enhance Egypt’s offensive naval capability. Their delivery had been delayed for more than five years over concerns voiced by Israel that the Block II Harpoon would change the military regional balance.
But the US administration has agreed lately to sell Egypt this anti-ship weapon, & associated parts. Egypt will use the Harpoon missiles on upgraded S-148 Tiger class patrol boats to enhance its operational capacities.
Harpoon Block II provides an accurate long-range guidance for land and ship targets. It is capable of executing both land-strike and anti-ship missions. The cruise missile uses GPS-aided inertial navigation to hit a designated target on land or ship. Its 500-pound blast warhead can deliver lethal firepower against a wide variety of land-based targets, including coastal defense sites, surface-to-air missile sites, exposed aircraft, port/industrial facilities and ships in port.
During the 1967 war, the Egyptians used a Soviet-built cruise missile to sink the Israeli ship Elath. The U.S. military took note of the Egyptian success and within a few years launched cruise missile programs. The cruise missiles allow the military to attack targets on land and water without having to put a pilot’s life in danger. Their value was demonstrated in 1991 during the Persian Gulf War.