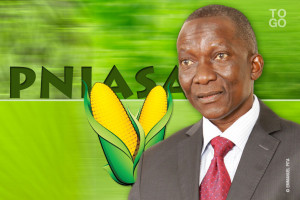 The next crop season looks promising for Togo’s farmers. The Ministry of Agriculture, Livestock and Fisheries has announced on June 24 that six hundred tons of improved seeds of rice and maize will be distributed free of cost to farmers throughout the entire country.
The distribution operation was launched on Wednesday in Kovié, a town located at about 35 km north of Lomé, the capital, by the Minister of Agriculture, Livestock and Fisheries, Colonel Ouro-Koura Agadazi.

“This will end low production and increase productivity and Farmers’ income,” said the minister during the launch ceremony.

“We view famers as change agents and consider that their role is very significant in ensuring food security in Togo and the west-Africa sub-region”, the minister said.

The program is part of the Agricultural Productivity Program in West Africa (WAAPP), one of the three key projects of National Agriculture and Food Security Investment Program (PNIASA).

Mr Agadazi has recalled that the objectives of the Agriculture Sector Support Project is to rehabilitate and reinforce productive capacities among targeted beneficiaries across selected value chains, and foster an enabling institutional environment for the development of the agricultural sector, in the country.

While Togo was suffering a cereal production deficit of about 13% in 2008, it has recorded annual grain surpluses of over 100.000 tons since 2013. The government targets 745,000 tons of tubers surpluses this year.

In Togo, most farmers used to buy their seeds and inputs from cooperatives, which usually did not offer any choice of seeds. Now, through the National Agriculture and Food Security Investment Program (PNIASA), farmers have options for quality tools and inputs and can get agronomic and veterinary advice as well.