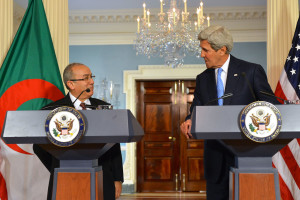 The Algerian foreign ministry has slammed a report from the U.S State Department that criticized the North African country’s human rights records. The ministry said in a statement that the report is a U.S “bureaucratic trend” with “simplistic conclusions” different from the reality.

While the Algerian presidency hailed in a message to the nation on the occasion of the 53rdanniversary of Independence Day, the judiciary reforms initiated by the country, the State Department report claimed that torture, arbitrary arrests and the restriction of freedom of speech and expression are still being practiced.

The Algerian foreign ministry criticized the report as lacking credibility because of the“wrongful convictions” it mentions.

The annual report on human rights from the State Department pointed out that “cases of torture in prisons, arbitrary arrests against protesters and protests by unemployed, as well as cases of falsification of the recent presidential elections’ results which took place in April, 2014 based on statements made by opponents.”

The document also unveiled measures used by security forces to break up demonstrations and strikes especially in the build-up to last year’s presidential elections when Bouteflika’s candidacy was questioned due to his health condition.

The ministry stressed that Algiers eyes the report as “a mere extension of the bureaucratic trend that tends to clone and stereotype based on obsolete references, biased assessments and overly simplistic conclusions.”