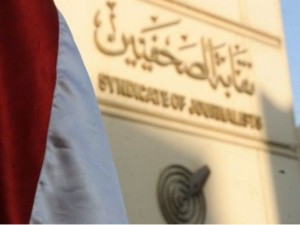 The Press syndicate in Egypt went public on Monday to denounce the new draft anti-terrorism law which, they say, will jeopardize the freedom of press and curtail the objectivity in the journalism profession in Egypt.

President al-Sisi’s pledge to curb terrorism is seriously damaging the journalism profession in Egypt as the syndicate members are alarmed that the draft anti-terrorism law, adopted last week by the Cabinet, especially article 33 of the law will considerably deprive journalists and foreign reporters based in Egypt of their rights and curb objectivity in their profession.

Article 33 of the draft anti-terrorism law adopted on Wednesday is judged controversial by the syndicate as it punishes by a minimum of two years in prison the publishing of “false news or data” which contradict official data on “terrorist operations”.

The government says that the article will be only applicable in four conditions: if the case is related to “terrorism”, if it is deliberate, if it involves publishing false news, and if such news contradict official data.

In article 26, government will indict anyone accused of “terrorist crime” committed in writing, saying or any other means and will be punishable by a minimum of five years in prison.

Article 27 grants the government the authority to sue anyone who creates or uses a website to promote ideas or beliefs which call for committing “terrorist acts”, to mislead security authorities, to affect “the course of justice” in a “terrorist crime” or to exchange messages or assign responsibilities within “terrorist groups”. A minimum of five years in prison will be handed in those cases.

The article also stipulates that any illegal access to a governmental website to acquire, change, erase, damage or forge information on the website for the purpose of committing a “terrorist crime” is punishable by at least 10 years in prison.

Under article 29, anyone collecting information on people operating under the anti-terrorism law for the purpose of exposing them or threatening them, is punishable.

Article 27 bans photographing or recording court sessions in cases related to terrorism without the court’s permission.

The syndicate promised to come together with other syndicates, political parties and civil society organisations to define a common position against the draft though it stands by the anti-terrorism operation.

However, as custodian of the press, it says it is its responsibility to ensure the freedom of the press and its independence.

“We stress we will also firmly face any articles tucked [within the law] to target this freedom,” the syndicate said in a statement.

Egypt ranks today among countries where the freedom of the press is under grave scrutiny, with scores of journalists now in prison, arrested in action.

The New York-based Committee to Protect Journalists (CPJ) put the number of journalists arrested at 18 in a report on press freedom in Egypt published in June.

The new Egyptian constitution adopted in 2014 guarantees the freedom of the press.

Khaled Al-Balshy Journalist Syndicate member argued that articles of the law conflict with the 2014 constitution and also ruin gains made by journalists in a country hostile to journalists under successive regimes which marked politics in Egypt.