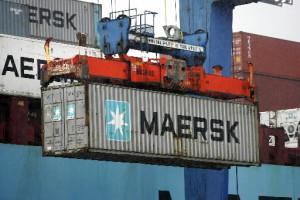 The Danish shipping company A.P. Moeller-Maersk A/S freight volumes is expected to grow by 10 percent in the East African region this year due to the  acceleration of economic growth and improved efficiency at major ports of the region.

“In East Africa, we are seeing increased political stability, a growing middle class, infrastructure development and oil resources that will drive growth,” Steve Felder, the managing director of the company told reporters  yesterday.

Felder said “We are currently seeing 24 berth moves per hour at the Mombasa container terminal, which has potential to double with on-going investment in hardware, deployment of better I.T. solutions and training”.

“Productivity in the private terminal at Dar es Salaam has greatly improved over the past year to 33 berth moves per hour.”

Maersk, the Copenhagen based company shipped 380,000 20-foot equivalent units in the region last year, about 35 percent of the total market, according to Felder. The company operates the world’s largest shipping container line and employs almost 10,000 people in more than 40 African nations.