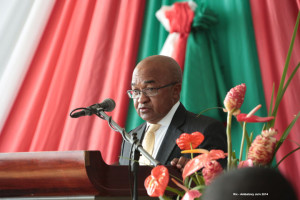 Madagascar’s Minister for Mines & Petroleum Joeli Valerien Lalaharisaina has declared Madagascar ready to do business with the international community and is currently in the process of updating the nation’s petroleum and mining codes to make them more attractive to international investors.

According to him, the Indian Ocean Island, Madagascar will pass long-delayed mining and petroleum bills in October when the national assembly returns from a recess.

“We will adopt these codes on a national level, and they will become law by the end of 2015” Lalaharisaina said.

The Minister told journalists that its country plans to auction 96 offshore blocks in the Mozambique Channel after the petroleum bill is passed.

“As soon as the petroleum bill is updated at the parliament, we will make an international bid round,” Lalaharisaina said. The new mining bill has been delayed as the World Bank, mining companies and civil society needed to be consulted, Lalaharisaina said.

It’s in the final phase now,” he added. The World Bank in Madagascar confirmed it was advising the government on the new mining bill.

London-listed Rio Tinto owns 80% of an ilmenite mine on the southern tip of the island, while Toronto-listed Sherritt International owns 40% of the $5.3 billion Ambatovy nickel mine.

Madagascar hopes to accelerate economic growth by developing natural resources, but has struggled to attract foreign investors in recent years due to political instability and falling commodity prices.