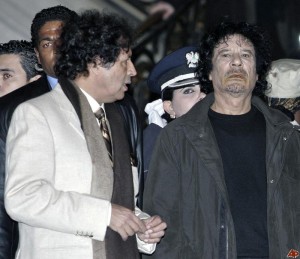 Speaking to Al Arabiya News, Al Dam was very critical of the death sentence and argued that this new development will add more fuel to the fire.

“This sentence blows up every hope and initiative for a dialogue and for Libya’s stability,” he said.

“I am deeply surprised over whoever was astonished by this sentence. We are now before gangs carrying executions every morning outside the law’s frame. The prisons are full with more than 40000 between men and women who did not do anything except refuse the state of falsehood which resulted in forced displacement and exodus of no less than half of the Libyan people.”

Gaddafi’s former close aid who is currently residing in Egypt, his mother’s homeland, also bashed countries which were involved in bringing down the Libyan state and structure. He sounded very concerned at the development of events and sceptic about the future of Libya which is now, he said, completely shredded.

“The full responsibility of these sentences and of what is taking place falls on the countries which participated in overthrowing the Libyan state and destroying its army,” he said.

“I am expecting reactions which will destroy everything and everybody if we don’t take an action that fixes the situation and then we will not be able to know who would be tried.”

Saif al-Islam has been sentenced to death after he was found guilty of war crimes by a court.

Just few hours after the sentence was announced in Tripoli, the internationally recognized parliament in Tobruk unanimously approved an amnesty law providing for “a general amnesty for all Libyans since February 15, 2011 and until today.”

The law, seen as a response to the sentences announced by the Tripoli court, stipulates that those who want to benefit from the amnesty should present “a written pledge not to commit crime again and to return the embezzled public funds, in addition to reconciliation with victims of crime.” Claudio Cordone, Director of Human Rights, Transitional Justice and Rule of Law Division of the UN Support Mission in Libya criticized the trial, citing the absence of several defendants and the “little effort made to establish individual criminal responsibility” of the 37 officials, 4 of whom were acquitted of all charges. He lamented that the trial was poorly conducted “thus missing a historic opportunity to construct a public record of crimes committed by the former regime” that would have served as “a key step in Libya’s transitional justice process.”