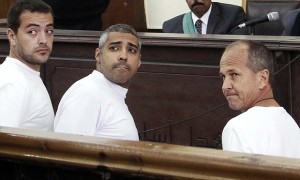 An Egyptian court has postponed its verdict in the retrial of two Al Jazeera TV journalists charged with “broadcasting false news” to August 2, a judicial source said Thursday.

Australia’s Peter Greste, Canadian Mohamed Fahmy and Egyptian Baher Mohamed were sentenced to prison last year for “spreading false news” in support of the blacklisted Muslim Brotherhood during their coverage of the turmoil after the army ousted Islamist president Mohamed Morsi in July 2013.

The trio was originally detained in 2013 at a Cairo hotel only days after Egyptian authorities branded the Muslim Brotherhood a terrorist organization.

Mohamed Fahmy who has given up his Egyptian citizenship and Baher Mohamed were both earlier convicted for “broadcasting false news” and “threatening Egypt’s national security.”

A third Al Jazeera journalist, Australian Peter Greste, who had faced the same raft of charges, was deported in January.

The court was scheduled to deliver its verdict on July 30, but delayed it amid reports that the judge was sick.

Following the adjournment, the Al Jazeera Media Network’s Acting Director General Mostefa Souag, said: “We are outraged that the verdict has been adjourned as today was meant to be the final court hearing for our colleagues.”

He urged Egyptian authorities to bring an end to the charges against the three men, insisting that journalism is not a crime.

Al-Jazeera has repeatedly denounced the trials as “political”.

Egypt was holding at least 18 journalists behind bars in relation to their work, according to a prison census conducted by the New York based Committee for the Protection of Journalists in June.

Most of the journalists were accused of being affiliated with the Muslim Brotherhood.