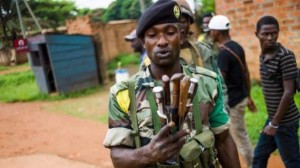 Ten people were killed and five others injured on Friday in religious clashes in the Central African Republic town of Bambari, police said.

The violence began when a mainly Christian militia group identified as anti-balaka militants” beheaded a Muslim youth leading to reprisals from Muslims.

“Two young Muslims leaving the city (on Thursday) were detained by anti-balakas who beheaded one and wounded another. We went to take the body back to the mosque,” said Captain Ahmat Nejad, a spokesman for the mainly Muslim Seleka faction.

“This triggered the anger of young Muslims who have carried out reprisals against Christians,” he said, speaking from the central town of Bambari, which is a Seleka stronghold.

“We have a provisional toll of ten dead and five injured,” the official said.

Father Félicien Endjimoyo of the Diocese of Bambari said as many as 16 people were killed but it was not certain that the perpetrators of the initial attack were anti-balaka militia since the town is controlled by Muslims.

The incident underscores instability in a country divided along religious lines by violence since 2014 as Christian gangs called the anti-balaka drove Muslims from their homes in the south.

The Central African Republic descended into bloodshed after a 2013 coup against long-time leader Francois Bozize that unleashed a wave of violence in the former French colony, pitting Christian anti-balaka militias against Muslim Seleka rebels.

Driven from power in January 2014 following an international military intervention, the former Seleka rebel coalition had based its top commanders in Bambari.