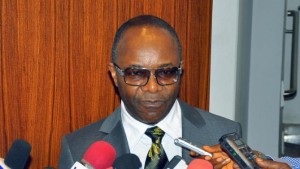 Nigeria’s state oil company NNPC is set to deploy drones to check the movements of ships in the country’s waters in a bid to free Africa’s largest crude producer from theft of the commodity.

The managing director of the Nigerian National Petroleum Corporation (NNPC), Ibe Kachikwu, made the disclosure on Tuesday at a special conference on security in the Gulf of Guinea.

“We are launching an armada of approaches which will include incorporation of drones to check movements of vessels within our territorial waters,” he said, according to an NNPC official statement. The new mechanisms could be deployed within eight months.

“We are looking at the current logistical nightmares of changing staffing at the loading bay of crude oil export terminals virtually every 90 days,” Kachikwu said in the statement. “In eight months we must be able to deliver an environment that is free from the vices of oil theft.”

“We are looking at the current logistical nightmares of changing staffing at the loading bay of crude oil export terminals virtually every 90 days,” he added.

Oil generates around 70% of government revenues in Africa’s biggest economy.

But a 2013 report by think tank Chatham House said that 100,000 barrels per day were being stolen. This represents 5% of Nigeria’s daily production.

Kachikwu, appointed head of the NNPC last month, has promised to conduct a forensic audit into the opaque accounts of the state corporation and review all contracts with its joint-venture partners and production-sharing agreements, as part of an effort to clean up the industry.