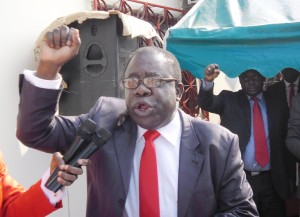 Moukagni Iwangou has been one of the most outspoken voices in the opposition and is the president of the Opposition Front for Change – a coalition of parties seeking to end the 47-yearl rule of the Gabonese Democratic Party.

Moukagni Iwangou declined the ministerial position he was offered, calling for political change in the oil-rich Central African country.

On Sunday, President Ali Bongo appointed Mathieu Mboumba Nziengui, Executive Secretary of the Union of the Gabonese People (UPG) as Minister of State for Agriculture.

Madeleine Berre, head of Gabon’s business chamber, was named as minister for trade, and small- and medium-sized companies.

Recently, the Gabonese opposition has appealed to the Secretary General of the International Organization of Francophonie (OIF), Michaëlle Jean to use her influence and convince President Ali Bongo to hold “inclusive dialogue” with his opponents ahead of the 2016 presidential election.

Ali Bongo became president of Gabon in 2009 following the death of his father, Omar Bongo, who ruled the country of about 1.5 million people for more than 40 years.