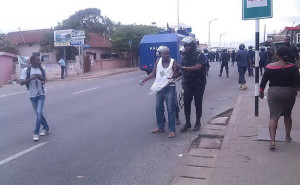 Police in the Ghanaian capital Accra on Wednesday fired tear gas and rubber bullets to bar opposition protesters from the headquarters of the Electoral Commission (EC) to demand a new electoral roll.

At least 20 people, including members of the opposition New Patriotic Party (NPP,) were detained briefly for violating a court injunction that barred the marchers from entering the offices of the EC, Police spokesman Cephas Arthur said.

The organizers of the protests said they would not be intimidated and vowed to continue with the demonstrations.

The Let My Vote Count Alliance and its allied civic groups deemed the highhandedness of the police in the protest march a threat to democracy.

The UK branch of the New Patriotic Party (NPP) has described the police brutality towards demonstrators as “disgraceful, shameful and an affront, that will leave a deep scar on Ghana’s democratic dispensation.”

The NPP last month asked the electoral body to create a new voter’s register before elections next year, saying it had evidence that the current electoral roll was bloated with ineligible voters, including the names of Togolese nationals.